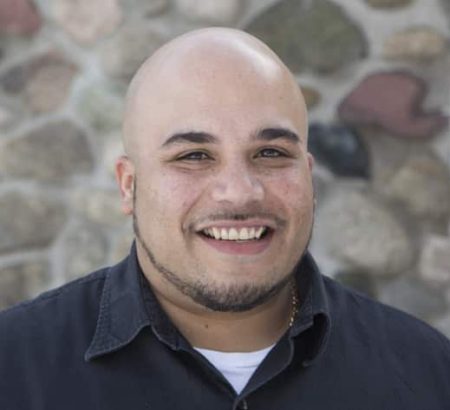 In his eighteen years with Red Tomato, Angel Mendez has held titles from Warehouse Manager to Director of Operations to Interim Director. Now, our team is excited to announce Angel’s newest role: Executive Director.

Chair Dawn King said the decision to appoint Angel was one of the easiest our Board of Directors has faced. “We can’t think of a better person to step into this role. We are lucky to have him.”

Angel is a longtime food systems innovator and an integral part of the food community, in the Northeast and nationally.  In addition to full-time work at Red Tomato, he serves as a National Good Food mentor, Treasurer on the board of the Urban Farming Institute, and board member for the Equal Exchange banana company. He’s also just a joy to work with, with the kind of infallible positivity and work ethic our organization relies on.

The past year has been one of the toughest in Red Tomato’s 22 year history. Fighting for a sustainable regional food system is inherently difficult work. With major shifts in the market and organizational changes compounding one another, the need to respond quickly with new strategies was more crucial than ever. Red Tomato continues to weather the tides, turning lemons into lemonade (tomatoes into tomato juice?) in part thanks to Angel stepping up to the plate and assuming the role of Interim Director.

With a downsized staff and some unexpected (though welcome) sales increase, Angel has been not only leading our organization, but continuing to do much of the work held by his previous position and others- he’s been the boss man, the IT guy, the logistics coordinator, and more.

One afternoon, as Angel went down his seemingly endless list of to-do’s, he shared a trick with me: change your mindset. “You’ve just got to

expect things going wrong, problems happening. Otherwise you’d stress all day, you’ll be up all night. When you’re prepared for that, it doesn’t overwhelm you, it’s just the norm. Solve one problem, okay, what’s next?”

It’s sound advice. His ability to withstand and press on through seems to be not only a mental state, but a core part of his character. It’d be a disservice to oversimplify Angel’s journey- at Red Tomato and in life overall- into a cliché about hard work overcoming adversity. Life is rarely so straightforward. But his story follows that classic arc, and puts his success into a new perspective.

Growing up in Jamaica Plain, Boston, Angel’s youth had little of the privilege held by the average company executive. His mother was a single parent, living under the poverty line and working hard to take care of two children. Angel describes Boston in the eighties as a world with immense pressures- drugs, gangs, violence- countered by his mom’s dedication to raise her boys right and make them as educated as they could be.

Angel and his brother shared her sense of dedication, and were steadfast on succeeding, no matter the odds. “My brother and I always spoke about what we call “the cycle”- kind of a cycle of poor. We’ve always wanted to break that cycle for the Mendez family.”

The cycle Angel speaks of is very real. Its effects can be identified in countless aspects of American society.

We see it in the data on standards of success for traditionally marginalized populations. A 2017 study conducted by the Building Movement found only 25% of non-profit of Executive Directors are people of color, and a mere 6% are Latino or Hispanic. Over two-thirds of that 25% lead “identity-based” organizations- those dedicated to issues for POC. So Angel, a proud Puerto Rican killin’ it as the ED of food systems nonprofit, is a rarity. 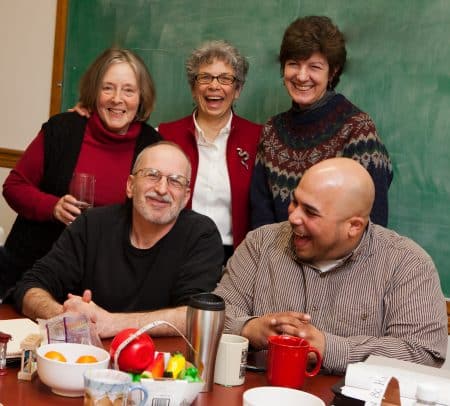 In my tenure here, I’ve heard nothing about Angel’s backstory until now. That’s not surprising. His talent and humility speak for themselves, and don’t need to rely on any deeper explanation of exactly how impressive they are. He makes that clear when discussing his career path: “I don’t want to be the guy that tells my kids, ‘if I could be…’, ‘what I could’ve done…’, ‘if I went to school…’- I want to tell them how I did it.”

And done it, he has. As challenging as this time may be, it’s an exciting one for Red Tomato, with new ideas fueled by our foundational optimism that we can make a difference. Like Dawn, we can’t think of a better person to lead us through those challenges and channel that optimism.

If you’ve met Angel, you can probably hear his laugh- full and genuine; pretty funny in itself. It often feels best when punctuating the end of a sentence describing the madness of the day: a truck’s broken down, the delivery is late, the rest of the day’s schedule has descended into chaos. The laugh, smile, shake of the head- it doesn’t feel trivializing, it feels grounding. A shared understanding of “man, this is crazy, can you believe it?” And then you fix it. And then you move on. Or, as Angel would say: onward and upward.

Watch an interview with Angel from 2012 to learn more about his personal life and his career.