Fishkill Farms is an apple orchard in Hopewell Junction, New York that has been in orchardist Josh Morgenthau’s family for almost 100 years. His grandfather Henry Morgenthau Jr. started the farm before going on to serve as US Secretary of the Treasury under President Roosevelt. Though Josh studied art in college, he moved back to the farm to pursue his second passion: agriculture. Josh explains, “the farm was on the brink of no longer being viable. I saw an amazing opportunity to help preserve the land by continuing to farm it in a progressive way.”

Josh is dedicated to achieving sustainability and carbon-neutrality on the farm. “The future depends on us fixing our food system,” he says. Working with other young farmers who share this vision, he has diversified the operation to include organically grown vegetables, summer fruit, chickens and sheep. Recently, Josh has been experimenting with grazing livestock under the apple trees for the purpose of disease control and fertility.

This spirit of innovation extends to other aspects of the farm as well. The farm recently received a grant from the USDA, making it possible to install a 40-kilowatt photovoltaic system on its barn. This installation will generate over half of Fishkill’s electricity, an invaluable contribution for a farm that runs a bakery, a store, employee housing, cold storage, and a developing cider-pressing operation.

The commitment to ecologically-sound farming practices can be a challenge to maintain in the face of insect pests and devastating diseases that threaten the orchards on a yearly basis, especially for the five acres of apples that are grown organically. But it is the challenge of farming that Josh loves most: “Each season is completely different. I think I will be learning as much about farming 20 years from now as I am now.”

In addition to the 15 apple varieties currently grown, some unique heirlooms such as Esopus Spitzenberg and Cox’s Orange Pippin have been recently planted. Josh’s personal favorite for eating is the tangy Stayman Winesap, and the Idared for baking and applesauce. All of the farm’s apples are tended according to Red Tomato’s Eco Apple standards. Josh appreciates the Eco Apple certification because “it helps promote and fairly compensate farmers with good growing practices.” This is especially helpful in marketing the fruit directly, as Fishkill Farms does: through an on-farm market and u-pick operation, local farmers markets, and a new CSA group. “Having the Eco Apple certification helps us communicate our growing philosophy to our customers,” Josh says. “It’s a good conversation opener!” 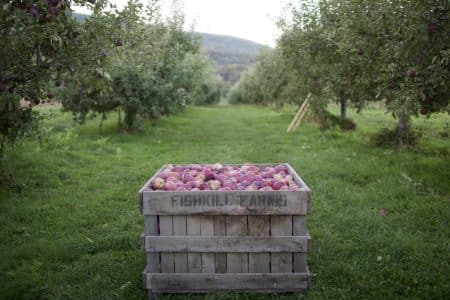